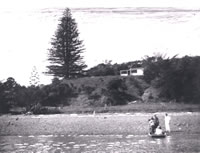 Still Watching the Years Go By

A  Norfolk pine stands sentinel on a knoll at the end of the Te Wahapu peninsula, in a prominent position within one of our recreational reserves. A sign below the tree was erected to mark the reserve in July 1988 by the Historic Places Trust. The wording on the sign is:

In this bay, Te Wahapu, a trading post and ship repair yard were established by Gilbert Mair in 1831, and run by him with William Powditch as a partner in the early years. Mair’s house stood on the point, beside the Norfolk Islands pine planted by Mrs Mair about 1836. From 1840 the station was operated by American leasees, two of whom, William Mayhew and Henry Green Smith, also served as vice-consuls. It was occupied by British forces on July 20, 1846, and garrisoned by the 58th and 65th regiments until December 1857.

The old tree has an unusual appearance. George Cook, writing in the New Zealand Herald in the 1930s under the nom de plume “Lonehander” reported:

…before attaining its full growth some sailors from a warship cut the top part off for a spar, and naturally there was trouble. However that bit of mischief cost the Queen’s sailors £20, and the tree grew on, but instead of only one shoot it put forth several, and strange to say they all flourished. Hence the present unique appearance…

In 1999 concerns were held for the tree’s survival as erosion cut away at the bank below, exposing many of its roots. However the tree still flourishes, as does the one in the Waitangi Treaty grounds, which is the same age and from the same source. Mrs Mair planted one seedling and gave the other to Mr and Mrs Busby, a hundred and seventy two years ago. The Waitangi tree is a classic specimen though, with only one trunk. The photo shows the Te Wahapu tree and reserve area in the 1940s.