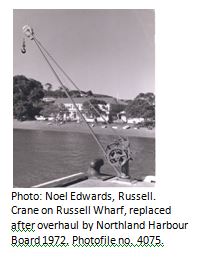 Imported from the UK in the 1850s, the crane was installed in 1866 at the end of our town’s first wharf, just north of the police station.  When it arrived, it was put to work by its owner, Samuel Stephenson, offloading goods from trading ships into small trucks, which were then pushed into the warehouse.  Purchased by the government in 1880 and moved to their wharf, now our current wharf, the crane unloaded goods from coastal ships.  Coastal deliveries declined as automobiles and road access improved, and a new purpose was sought for the crane.  With increasing tourism in mind, especially game fishing, supports were added and the crane began hauling cargo of a different kind; gamefish for weighing-in.  Perhaps for that brief period, Russell’s crane was at the pinnacle of its public life as it attracted the attention of our local youth who saw the benefit of the higher vantage point it provided.  Much to the delight of tourists, the dismay of parents and local skippers, swimming off the Russell wharf was taken to a new level as Russell’s young bloods experienced the thrill of a high dive as Max Arlidge explains “…the daring ones amongst us would dive from the crane”.