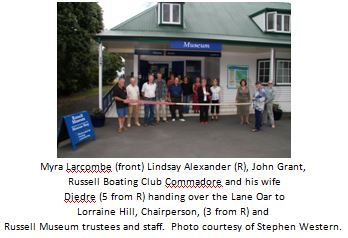 Past events and our knowledge of them are more often than not lost to the mists of time but sometimes a link is made and history is hauled into the present for a new generation to carry forward our precious stories.  Such is the case of the Lane Oar.

At the turn of the century, Tom Joyce of Paihia had two whaling boats, Hinemoa and Tutanakai, until, when the whaling industry declined Myra Larcombe’s grandfather, Henry Lane of Te Wahapu, who owned the sawmill at Koutoti, purchased the Hinemoa.  Tom fitted Tutanakai with a motor in 1910 and as Paihia had no school, ferried children to Opua.  The oars were also put to different use.

Myra remembers as a child on the farm in the Waikare, the oar having been passed on to her father Edmond Lane. “It was hung under the boatshed to sling fishing net over to dry and when Dad bought the Owaka, it was transferred and lashed under the sundeck in case of emergencies”, she explained. That emergency occurred in the late 1950s.  “After unloading a barge load of sand at Derrick Landing we were running the tide down river with the barge alongside. You have to get speed up to maintain steerage. Suddenly the launch hit a snag and the rudder sheared off. Dad quickly leapt up and grabbed the oar from under the sundeck and lashed it to the stern railing and steered back to Opua berthing the launch and barge at the wharf.   The steering oar performed perfectly.”

“When we sold Owaka the oar went with it”, says Myra.  “It was a bit sad because we lost track of it”; that is, until recently when Lindsay Alexander, while researching the whaleboats, made a connection between the Lane Family and an oar with the letters H. Lane carved on it, hanging in the Russell Boating Club.  Myra recognised the oar instantly and, although the blade now sports a coat of red paint, her grandfathers initials are still there, in history’s memory.