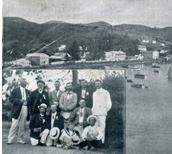 A hundred years ago Laurie Coates was born and the first service was held in Russell’s newly built Methodist Church. What else happened that year? Big news was the bitter two month long waterfront and general strike involving up to 16000 unionists, scab labour, blacklisting and violent clashes with Prime Minister Massey’s “Cossacks” (mounted special police). Our first cross country flight left the Avondale racecourse and flew  3 miles, at more than 70 km per hour, before making a forced landing at New Lynn. Gaston Méliès made New Zealand’s first silent feature film Hinemoa. It screened in New York in 1913 but never here. Closer to home, a gorse fire, started by Bert Williams, got out of control and spread to Maiki Hill where it levelled the flagstaff  Whakakotahitanga. According to Marie King, after J.S. Deeming refurbished it, the “sixth erection of a flagstaff on Maiki Hill, was accomplished with so little ceremony or publicity that no one can remember the date.” There was no road into 1913 Russell – transport was by water, by horse or on foot. The Clansman had long been the town’s main communication with the outside world – loading and unloading supplies, newspapers, mail and passengers. The rail line from Taumarere to the port of  Opua was opened in 1884 but it wasn’t until 13 April 1911 that the connecting line reached Kawakawa from further south. This meant more visitors for Russell. The images show Russell on Regatta Day 27/12/1913 and the committee of the Russell Regatta: Standing L to R: T Cook, T R Williams, T Boucher, G Hewin, A Hitchcock, W Anderson. Seated L to R: W A Wilkinson, H J Hirst, Leslie Hirst, A E Bissett, Jo Eva.