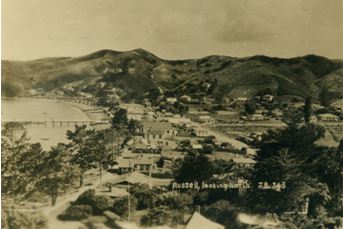 As is customary Russell Museum/ Te Whare Taonga o Kororareka, an asset that belongs to the community, reports to you. It has been a year of high and low points but we believe we have made some progress.

Our main focus in looking ahead was to plan how to develop the museum in the next decade.

Chris Tipler, a business consultant from Australia (with a holiday home at Long Beach) suggested we had two options – a high road (involving a funded consultant) or a low road (“big tinkering”) where we would tap into local expertise. The Trustees felt it would be more prudent to use the latter approach. An appeal in last January’s newsletter brought a response from several, including John Fielding, who had a background in project development. John involved Christine Hall a local draughtsperson and also John Davies a retired architect now resident here to work with the curator, administrator and Trustees. Ideas are now coalescing – we have agreed to extend our museum towards The Strand by replacing the older wooden part of the building, with a main entrance facing the Tamati Waka Nene reserve.

This year we hope to finalise the plans for Far North District Council and community comment and approval, and make a case for funding applications.

Initiatives to increase visitor numbers have included a combo ticket with Pompallier, a tour also with Pompallier for ship passengers, and joining the Bay of Islands Education Network package driven by Waitangi National Trust to start in February 2016.

The Museum shop has provided an additional revenue source. The many souvenirs of the area and the range of books continues to be popular as are the historic prints that are available. Prints can be ordered and emailed in JPEG format.

Exhibitions this year included “Shaped by the Sea” which explored maritime themes in our history.

“At home and away” featured Russell people during World War One.

The present exhibition until the end of February is “Celebrating 175 of Education in Russell” with photos from the Russell Museum and Russell School collections – much of the material coming from the School Reunion held in November 2015, when 300 people attended. Photos of that event are on display too.

Ongoing work includes restoration of our historic crane (Hylton Edmonds), assessing our Endeavour model for possible sailing in 2019 (Tony Hanlon), and our project to enhance the Tamati Waka Nene reserve adjacent to the Museum with carvings depicting the chief’s life.

Sadly our curator Shelley Arlidge resigned her position in October. We would like to record our appreciation of her work at the museum, starting as a Museum Assistant in 2007 and becoming Curator in 2011. She undertook museum studies and did much to stimulate discussion as the trustees searched a future direction for the museum. We wish her well.

Trustees will be considering a new position shortly.

Russell Museum– Te Whare Taonga o Kororāreka is administered by the Russell Centennial Trust Board which is a registered charity. Registration number: CC35416