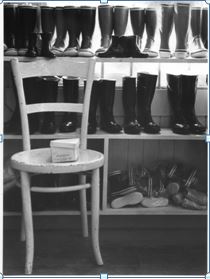 You’re looking into the waterfront Four Square store in 1997. Maybe it was winter. Maybe in summer there would have been rows of jandals lined up. Back then the middle of the town was still a bit swampy, the domain footy field was a bit wet at one end – customers of all sizes needed good waterproof footwear. Now try to imagine stores over a century earlier. Here’s a hint – from the New Zealand Advertiser and Bay of Islands Gazette of June 19th 1840: Geo. Greenway had for sale at his store near Russell, salt, flour, corks, cordage, canvas, twine, ironmongery, paints, oil &c. &c; John J. Montefiore, of Kopua, Russell, advertised tobacco, Wardell’s sherry in bottle, claret ditto, port and sherry in bulk, vinegar, salt, red and blue shirts, white ditto, stockings, cantoon trousers, blue cloth trousers, vests, prints, ginghams and other articles; while William Wilson begs to acquaint his Friends and the Public, that his store at the Pa is still carried on, where they can be supplied with GOODS of every description. The previous issue had listed his goods as pitch, tar, oakum, butter, paint oil, porter, rice, calicoes, mattresses, sperm oil, ale, spades, biscuit, tobacco, white lead, wine, muskets. All the essentials of life could be found in 1840, in Kororāreka.