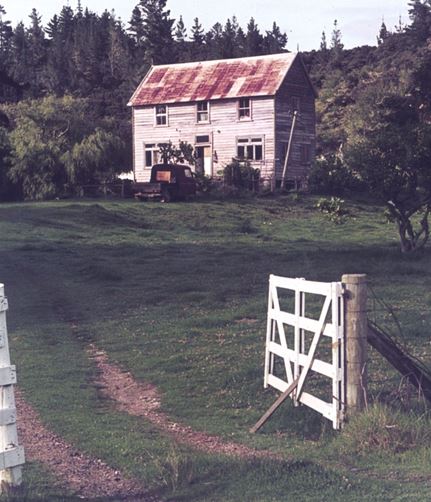 Many people believe the old homestead in Orongo Bay to be the former home of James Reddy Clendon but according to Russell’s best known local historian the late Miss Marie King that is not so. The following is extracted from the NZ Herald Feb 20 1976:

“You would not believe some of the stories that get around about the old house in Orongo Bay, near Russell, in the Bay of Islands. ‘It had nothing to do with Clendon’ said Miss King. ‘Clendon was the consul about 30 years before the house was built.’ Miss King said the house was built in the late 1860s by a Mr James White, who was at the time a consular agent in Russell, which was quite a different thing to being the consul.

He moved into it in 1870, and two years later moved to Auckland, when he was in fact made the consul and the man he acted as agent for retired. That particular consul apparently lived in Auckland because he was unpopular in Russell, which was the official seat of the consulate until 1871.

There are a few other yarns told about that place that stretch credibility. One is the story that there is an elephant buried either on the property…or on a nearby farm. This story seems to have grown out of the history of the Tikitikioure hill manganese mine to the east of the house. Many people think the mine was owned by the American consul…who was supposed to have…had an elephant working at the mine-head. But there was no elephant, Miss King maintains, and White had nothing to do with the mine. There was a village centred on the mine that was actually larger than Russell in those two decades, Miss King said. The manganese ore used to be loaded on to lighters in the shallow waters of Orongo Bay and taken to ships at Russell.

The third big misconception about the house is that there are Negro slaves buried on the property. They were supposed to have worked in the mine. This story has its origin in the fact that White in fact did have one or two Negro servants. They were not slaves, which were emancipated in the 1850s by the United States, and they moved to Auckland with White. Since then, Miss King said, the house has had a fairly unexciting history.

She can remember six different owners in the time she has been in Russell.It is not a registered historic place, and Miss King does not think it warrants it. “It has no historical associations at all,” she said. “It is not of sufficient interest. It was only lived in for two years by an acting consular agent…It has no architectural significance, and anyway, 1870 is almost modern history around here.’