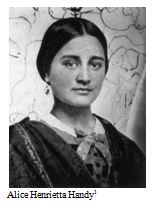 During the 19th century hundreds of American whaling barks set sail from New England for foreign seas.  In December 1844, lured by the news of great fortunes being made in the Pacific whaling grounds, Captain Ichabod Handy sailed the Belle out of New Bedford harbour.  His wife, Mary Warren, did not see him again until 1852.

For nearly a hundred years whalers visited the port of Kororareka / Russell for supplies, repairs and to give the crew time ashore.  Captain Handy was one of them.  Sailing into the Bay of Islands in 1846 he found a “hellhole” of whalers, traders, grog shops, trading posts, and brothels.  Ichabod took a beautiful local Maori girl as a ‘season’ wife but left her that same year to continue his Pacific venture.

In 1857, eleven years on, Captain Handy returned to Russell and sought the whereabouts of his Maori ‘season’ wife.  Instead he found a daughter from their union living with an aunt who had married an English settler.  Ichabod promptly named his ten year old daughter, Alice Henrietta Handy and made arrangements to take her back with him.  Still married to Mary Warren, Ichabod placed Alice with his two aunts, both captains’ widows, who lived just eighty kilometres north of New Bedford in Boston.  Alice Handy was Captain Handy’s only child.  She received an education and at twenty-one married William Vincent.  They had two children, Alice and William.  Alice Henrietta Handy died of consumption at the young age of twenty eight.