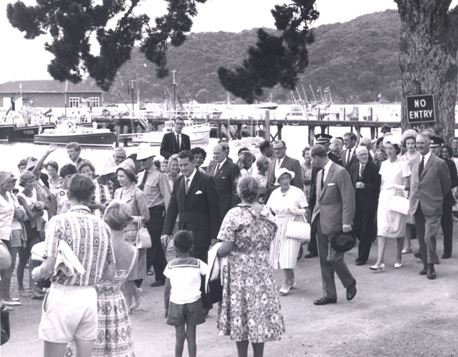 …was yet another first for Russell. Museum curator Marie King, in 1977, was not about to let Wellington claim that honour. She wrote to the NZ Herald and set them straight.

“It was in Russell on the afternoon of February 6, 1963. There was no advance publicity of this visit, as the tour organisers considered that large crowds in Russell’s narrow streets would be difficult to control. When the visit was being discussed with the town board, the chairman, Mr Eric Gilmour, pointed out that the Strand…was too narrow to allow for the royal car and the people. So he asked, would Her Majesty like to walk?

At first no one would hear of such a thing. The Queen would be mobbed. Mr Gilmour said quietly, ‘ Gentlemen, I assure you that Her Majesty will not be mobbed.’ Finally, the suggestion was approved. The royal party came ashore, walked along the Strand to the museum grounds… visited the museum, walked along to Pompallier House and from there to the old church. Not until then did the Queen enter the royal car to be driven up the hill to see the view…”

Where did she look out from? Queen’s View of course!