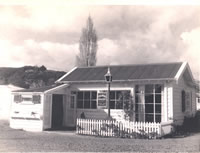 On the edge of the Russell museum grounds, by the York Street frontage, there stands an elegant lamp post.  A bit weathered, it now plays host to a few lucky spiders and the occasional bird looking for a resting place.  Originally from Auckland, the lamp post was brought to Russell by the Garlands in the late 1940s and early 1950s.  The Garlands were photographers and lived in a house (now South Sea Arts) next to the Four Square shop block/doctor’s dispensary.  As the house passed from owner to owner, so did the lamp post.  When Mr Des Smith bought the house he decided the lamp post, which still bore the sign “The Studio” wasn’t needed, and gave it away. 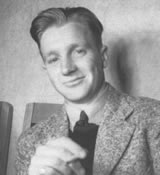 Two young artists, opening up their art gallery on the corner of York and Chapel Street on the 17th December 1967, were the recipients.  James or Jim, as people called him, and Pauline Yearbury, had the lamp post installed outside their art shop, “The Colonial Gallery”.  This talented team of artists contributed to the art world in creating their now famous incised and stained wood panels of Maori legends and the book with poems titled “The Children of Rangi and Papa: The Maori Story of Creation”.  Jim and Pauline also inspired the Russell community, especially youth who spent time with them: they encouraged them to be creative, to understand that knowledge was their friend and to be resourceful.  The art gallery was pulled down to make way for the Tavern car park, and Jim and Pauline shifted the lamp post to their Matauwhi home.  When Pauline died in May 1977, Jim gave the post to the Museum and a lamp, made by Roley Johnson and Gerald Wall was added.  Farewell Jim.