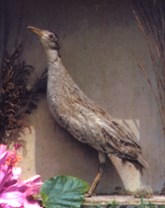 A Bird in the Hand

On the North wall of the Russell museum's main room is a small wooden case containing a member of the rail family. The bird has gazed through its glass fronted case for more than 150 years.

It dates from 1845, when during the Battle of Kororareka, citizens left the town for safety. A small girl from the Flowerday family managed to grab her cat which had just caught a bird in the creek near the boat ramp. During the voyage to Auckland, a sailor, an amateur taxidermist, stuffed the bird which several generations later was gifted to Russell Museum.

In 1987 New Zealand author, Dorothy Butler, wrote a delightful children's book called Come Back Ginger telling the story which has been reprinted several times. Visiting schoolchildren still come in to see Ginger's bird. It's great to have a story for young ones set in our town. (on sale in the Russell Museum shop).